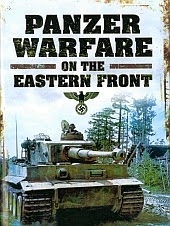 It was easy to feel impatient while waiting to get Schäufler's book and be able to start reading it. The author was himself a veteran of the Fourth Panzer of the once mighty Wehrmacht Panzerwaffe. Some other tank divisions would also be presented. One of the most interesting parts of the book for me was the chapter 5. It covers the story of the 16th Panzer's last months inside the Kessel of Stalingrad told by division's operations officer Oberstleutnant i.G Hubert Menzel.  I handled the same subject when writing about Count von Strachwitz's life and battles alongside the 16th Panzer.  Last but not least the book would offer memoirs from the last battles of West Prussia and in particular of the siege of Danzig.

As a matter of fact the book is a collection of brief memoirs of the frontline veterans from various panzer units. These units are the 4th, 9th, 11th, 16th and 18th Panzers which fought alongside the Army Group Centre or South.  There are altogether 14 chapters in the book, which follows the chronological order of events from the very start of the Operation Barbarossa in 1941 into a capitulation of Germany in May 1945. The book comes with six appendixes showing a Rank Table and Order of Battle for the presented panzer divisions. Sadly, maps in the book a rare and almost useless. Fortunately some exceptions are present! When dealing with battles of Stalingrad and West Prussia the handmade maps are quite fine.  Pictures are highly interesting and their placement is chronologically sound. It's just that the quality of paper used in the book doesn't allow the pictures to be of high quality. Some dismal mistakes have been made in the captions when certain tank identifications have failed to be correct: for instance how on earth one could take PzKpfw IV as PzKpfw III or Russian T-26B as BT-5? Small mistakes, you might add. The point here is that in a book specialising on the tank warfare one expects not have such errors at all. There are lots of  of names of places and people in the book, but no Index, Notes or Bibliography.

As mentioned earlier Schäufler covers the time span of the Eastern Front. That being said I have to add that he misses some six months when hopping from the late autumn of 1943 to the summer of 1944. Anyway, at the opening stages of the Operation Barbarossa Germans faced with the new Russian tanks T-34/76 and KV-1 as an unwelcome and unexpected surprise. Soon German tankers learned the inferiority of their principal fighting vehicle (PzKpfw III) against the new Russian models. This, in fact, caused Germans to loose their fighting spirits and demoralized them. It even produced a major crisis for the troops of the Eastern Front. It may have been the first one of a kind, but certainly, not the last one.

Russians fought the war like any German had never seen: often they defended their land fiercely and persistently, many times until the very end. The way Russians used deception and camouflage (Maskirovka) was efficient and masterly. All this made German Blitzkrieg time tables useless as they had not reached targeted A-A-line (Arkhangelsk - Astrakhan) including Moscow by the autumn 1941. As the autumn thaw (Rasputitsa) halted all movement the worn out Germans could only wait for the winter to make roads once more manoeuvrable. As the winter came it made roads and terrain once more passable. Although the Germans didn't have a clue of what kind of an experience the Russian winter would prove to be. Schäufler and the other veterans recollects the miseries of winter battles of 1941 - 1942 so vividly the reader almost can feel the frost, snow and the lonely vastness of the Russian landscape. Germans about to freeze to death in their summer uniforms had to somehow keep themselves alive and weapons functioning. Besides, the Russians had broke through the German lines in early December 1941 just in front of Moscow and the German Army Group Centre was about to collapse. As a pinnacle of German miseries Schäufler memorizes his last moment escape from the hungry wolf pack hunting him for lunch in the vast desert of snow.

Victories of the next summer of 1942 were later wasted in Stalingrad. New harsh reality for Germans came through the stalemate situation and draw as a result of the battle of Kursk. It was the beginning of a long and hopeless retreat. In Kursk Schäufler, a platoon leader in Panzer-Nachrichten-Abteilung 79 of the 4th Panzer, served in the signals corps. His experiences have little in common with von Strachwitz's ones as a tanker in the first wave of attack. The last section of the book concentrates on the last 11 months of the war in the Eastern Front. The reader is taken to the besieged garrison of Courland and into the West Prussia where the remnants of the Army Group North and Centre are fighting for their life. The story is by now very one-sided: Germans have lost too much men and materiel to stop the Russian red steamroller. The only option for Germans is to try to buy some precious time for civilian refugees to escape Russian revenge through the ports of Danzig, Pillau and Hela. This is why, in the page of 280, Unteroffizier Robert Poensgen, a war correspondent with the 4th Panzer, states laconically: "Danzig had to die so that the hundreds of thousand in the Vistula lowlands could survive. The horrible fate of a German city!". The end is inevitable. When the defenders of Berlin had already capitulated, in the West Prussia fighting goes on while the Kriegmarine does its heroic act of rescuing German refugees and soldiers through the dangerous waters of the Baltic Sea.

One of the finest narratives in the book deals, quite naturally, with the tank warfare.  Reader will see through the eyes of a gunner what happens inside a PzKpfw III as it gets a direct hit and is disabled and lying helpless just in front of the enemy bunker line. Equally interesting is to find out how to wage a tank war when the temperature is -54 C below zero. Even in the brutality of the WW II Eastern Front all isn’t just black or white. A German soldier assists a young Russian mother and her child risking his own life, if caught, in the hands of the German Military Police. Thankful local partisans issue the German with a code word. This lets him get unscratched through the partisan ambushes even far away from the village where he helped the young mother.  A group of English officers are being liberated by the Russians from the POW camp somewhere in the West Prussia. It will not take long for Englishmen to sneak through the frontline back to German side and ask Wehrmacht for protection. Likewise numerous French POWs who had been working for the East or West Prussian farms or estates since 1940 ask Germans a permission to join refuge columns heading west via harbours of Danzig, Pillau and finally Hela.

By the spring of 1945 the Red Army had encircled Danzig. Among the defenders were the remnants
of the Panzer-Regiment 35 of the 4th Panzer. Married men, fathers and the only surviving sons are gathered together to form a 200 men strong detachment. It is named after its leader Hauptmann Küspert and given a marching order to be sent home for refit. They took off from Hela docks with 6000 others on the troop ship Goya on the 16th April 1945.  Less than a day later a Soviet submarine had sunk Goya. Only 250 people on board survived including seven men of the Panzer-Regiment 35. Their leader did not make it.

One Jagdpanther crew in Preussisch-Stargard is in the middle of a fierce defensive fight against an overwhelming and charging Russian tank force. After successfully decimating a company of Soviet tanks, the crew suddenly, to their horror, notices a lonely enemy tank facing their vulnerable side armour. In a muddy terrain it takes time, the crew thinks too much time, to swing the heavy tank destroyer 90 degrees to gain a new firing position. Why isn't the Russian tank shooting at us? The crew looks through the prisms and just can't believe their eyes: the enemy tank is desperately, but in vain, trying to depress its cannon to shoot. The muddy terrain gives and takes. This time the Germans had their day by using the two last AP rounds left in the ammunition racks of their Jagdpanther.

Why it seems so hard to put together a decent study of a tank warfare? What I'm trying to say is that the actual content of a book has not always matched with the given title of it.This has been the case for various books of tank warfare I've read. Author may loose his touch from the given title and start writing  something quite irrelevant, with basically nothing to do with tanks. Another tribe are the ones who exaggerates themselves out of business like Vasiliy Kryzov. It's not over yet, the author may also face the shortage of sources so bad he must find more than enough background information to fill in the gaps within the story. This is what, I believe, happened to Mr. Bagnodas with his biography of the Count von Strachwitz.

Panzer Warfare on the Eastern Front is a work with a variable content. Once it offers a poetry which does not seem to have any possible link to the topic of the book. The very last story of the book takes us to the Baltic Sea struggling with seagoing and elements. However, the book is a credible, verbal and very personal war history on the tactical level. It is no wonder the perspective is from the German side - I mean what would you expect to get when you have a collection of small 4-5 page vignettes of front line Landser's stories. In the cover of the book there is a fine picture of a Tiger I -tank.  Oh no, don't expect to see or read about it any more inside the pages of the book. Too bad, the emphasis is on the foot soldier's experiences all the way along. That being said, the remaining coverage of the actual tank warfare is more than worth of reading.

What happened to the 16th Panzer and how it perished inside the Kessel of Stalingrad probably forms the most notable asset to the scholars and war history enthusiast that the book can offer. Hand made maps of 16th Panzer's last struggles just amplify the feeling. Here it is, this makes the book so hard to judge: it fails to complete its given mission, but at the same time, in few cases, it manages to raise high above the average. What if the title of the book would have been "Warfare on the Eastern Front"? I tell you, I would have given the book straight away five stars.